To share your memory on the wall of Truman Fox, sign in using one of the following options:

Print
Truman Fox, 90, of Cookeville, Tennessee, passed from this life on December 9, 2020, in his home surrounded by his family.

Truman was born May 1, 1930, in Gainesboro, Tennessee, and he was the son of the late William Oakley and Mattie T... Read More
Truman Fox, 90, of Cookeville, Tennessee, passed from this life on December 9, 2020, in his home surrounded by his family.

Truman was born May 1, 1930, in Gainesboro, Tennessee, and he was the son of the late William Oakley and Mattie Tennessee (Billingsley) Fox.

He and his wife Willene were married on August 28, 1953. They were married for 67 years. They had 2 sons David and Myron.

Truman was a loving son, brother, husband, father, grandfather, uncle, and friend. He proudly served his country in the U.S. Army. He was a veteran of the Korean War. He enjoyed working on their farm, working in the garden, and being with his family. He and Willene are longtime members of the church of Christ attending the Willow Avenue congregation. He was loved by all that knew him, and he will be greatly missed.

In addition to his parents, Truman was preceded in death by a son, Myron Fox, 4 Brothers, Aaron, Collie, Houston, and J.C. Fox; 2 Sisters, Mazola Anderson, and Esteen Flatt.

Private Funeral Service for Truman Fox will be held Sunday, December 13, 2020, from the chapel of Crest Lawn Funeral Home with Bros. Clarence Deloach and Mike Fox officiating. Interment will follow in the Crest Lawn Memorial Cemetery with full military honors.

To send flowers to the family or plant a tree in memory of Truman Fox, please visit our Heartfelt Sympathies Store.

Receive notifications about information and event scheduling for Truman

We encourage you to share your most beloved memories of Truman here, so that the family and other loved ones can always see it. You can upload cherished photographs, or share your favorite stories, and can even comment on those shared by others.

Posted Dec 14, 2020 at 05:54am
So sorry to hear of the loss of Truman. We have fond memories of McBroom's Chapel and your family. Praying for peace for you knowing that he was a fine Christian and now at home with God. Penny and Bennie Bilyeu
Comment Share
Share via:
HG

Posted Dec 13, 2020 at 06:23pm
David and Laura— Our love goes out to you both in the loss of Mr. Fox; we are holding you and your family in our hearts.
With love—Gray and Hatty Gill
Comment Share
Share via:
LF

Posted Dec 12, 2020 at 06:17pm
Very sorry to hear of Uncle Truman’s passing. Our condolences to Willene and family, Evelyn, and Junior. Sending our love, and prayers of peace and comfort.
Quentin, Linda, and Abby Fox
Comment Share
Share via:
P

Posted Dec 12, 2020 at 05:22am
I have know Truman and Willene for many years! They are a great example of what the Christian life is all about. My sympathy to Willene, David, Myron and families.
Prayers for peace and comfort for you all.
Pat Coomer
Comment Share
Share via:
LB

Posted Dec 11, 2020 at 03:21pm
So sorry for your loss. Prayers of comfort and strength for you and your family.
Love, Johnny, Lora, and Jesse Bates
Comment Share
Share via: 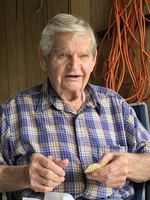