To share your memory on the wall of Paul Culpepper, sign in using one of the following options:

He will be... Read More
Paul E. Culpepper

Paul was preceded in death by his parents, John Wesley and Tillah Ford Culpepper, brothers, Dalton, Gobel and Robert, and sisters, Oneida, Marjorie and Doris, and his parents-in-law, Van and Rose Lee.

Paul served a short time in the U.S. Army following the end of World War II. He worked as a design engineer for Chrysler Corporation for 30 years. In 1986, he and his wife Juline retired to Cookeville, Tennessee, where he could spend time with his children and grandchildren. Paul was a very active member of Faith Baptist Church in Sparta, Tennessee, where he served as treasurer for many years.
Paul was a wonderful husband, father and grandfather. Upon learning of a person in need, he was an eager and supportive friend. He enjoyed the outdoors, traveling, sports and spending time with family.
The family would like to express their thanks and appreciation to all the staff at The Meadows Senior Community in Bellevue, Tennessee and Caris Healthcare for the care provided to Paul.
An outdoor funeral service will be held on Tuesday, March 23, 2021 at Crest Lawn Funeral Home, 800 W. Jackson Street, Cookeville, Tennessee. Visitation will be at 2:00pm (central time) with the service to follow at 2:45pm.
In lieu of flowers, donations can be made to Faith Baptist Church, 640 Maughon Rd., Sparta, TN 38583 or the Alzheimer’s Association, P.O. Box 41428, Nashville, Tennessee 37204.
Read Less

To send flowers to the family or plant a tree in memory of Paul Edison Culpepper, please visit our Heartfelt Sympathies Store.

Receive notifications about information and event scheduling for Paul

We encourage you to share your most beloved memories of Paul here, so that the family and other loved ones can always see it. You can upload cherished photographs, or share your favorite stories, and can even comment on those shared by others.

Dan and Diane sent flowers to the family of Paul Edison Culpepper.
Show you care by sending flowers

Posted Mar 21, 2021 at 11:57am
Paul was the essence of a very good man. Our sympathy, The Kaschak Family on Crippled Mule Point

Dan and Diane purchased flowers for the family of Paul Culpepper. Send Flowers 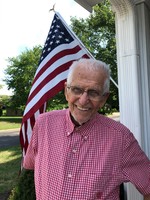