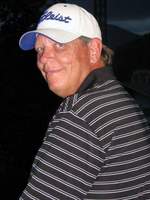 James Michael “Bobo” Borden Of Cookeville, TN passed away on March 24, 2021 at Vanderbilt Medical Center.
Michael was born February 6, 1957 to Robert and Cordova Borden who preceded him in death as well as his brother, Bob.
He is survived by his wife Cristy, Stepson Josh McDaniel, his daughters Kelli (Charles) Norris and Amanda Borden, two grandsons David and Dayton Biles, granddaughter Savannah Hunley, sister-in-law Amy Grimes, niece Cassidy McClure, special adopted family member Roxanne Tyus, Birdie, Shankie, Maddie, Gizmo, Jagger, Jet, Jules, Whitwell and numerous friends who will miss him very much.
Michael was the General Manager of Hidden Valley Golf and Country Club for many years. He was also known as “Mr. White Plains” for the years he spent there. He was happiest on a beach, a golf course of watching the Florida Gators. He once asked the doctors if they were having trouble finding blood that was orange and blue. He was known for his sense of humor, funny one-liners and the stories he liked to tell over and over again. He was a big-hearted guy who touched many people’s lives with his kindness and generosity. He loved his family and his dogs and will be missed by all who knew him.

A celebration of life is scheduled for Sunday, April 18th at Hidden Valley Golf & Country Club from 2pm-4pm.