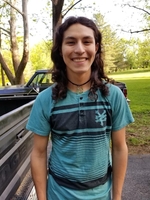 Born Saturday, May 9, 1998 in Marion, Indiana. He was the son of Tonya (Brooks)Condori Sullivan and step-father Art Sullivan.

Lorenzo had the greatest sense of humor and a contagious smile. He never knew a stranger, speaking to anyone. He would give the shirt off his back. Jack of all trades and master of many, he was a roofer, home builder, woodworker, and loved to work on old Dodge pickups with Ray Huddleston. He enjoyed working with antiques with Jon Beasley. He especially enjoyed spending time with his brother, Alex Condori, his friend, confidant and his person. Lorenzo had two very special friends, being thick as thieves, Sydney Wilson and Cody Martinez . They've been friends since moving to TN in 2012. His very best friend and post-companion, Kaylie Huddleston. Lorenzo was a caregiver to many clients of Pace Setters. He had such a vibrant attitude and presence. He was the light in the dark. He was the biggest light in many people's lives. The world is a lesser place without him. The one thing Lorenzo wanted in this life was for his mother to be happy. He loved her with all of his heart and soul. She was the biggest light in his life. He loved joking around and playing video games with his brother and Uncle Andrew and he was an avid gamer.

In addition to his mother, he is survived by:

A Funeral service will be at 4:00 PM on Saturday at Crest Lawn Funeral Home located at 800 West Jackson Street Cookeville, Tennessee 38501.