To share your memory on the wall of Glen Smith, sign in using one of the following options:

Born Monday, June 18, 1945 in Silver Point, Tennessee, he was the son of the late Walter Smith and the late Jewel Smith.

He was the loving husband of 52 blessed years, of Barbara Skelton Smith.

Glen and Barbara were owners of the Glen Smith Certified Financial Planner for 50 years until recently selling the business.

Glen coached little league baseball for over 30 years and Babe Ruth for the last 10 years. He recently had visitor, a former player from 20 years ago, who thanked him for mentoring him. He enjoyed fishing for crappie and blue gill, but mostly anything that would bite the hook. Glen enjoyed all sports, but mainly he enjoyed being at the Vanderbilt football and basketball games. He was a 30 year ticketholder. His friends even called him the "Ole Commodore".

In addition to his wife Barbara, he is survived by:


A graveside service will be at 10:00 AM on Tuesday, February 23, 2021, at Palmer Cemetery located at 13820 Old Baxter Road Silver Point, Tennessee 38582 with Bro. Morgan Wallace officiating. Interment will follow.
Read Less

To send flowers to the family or plant a tree in memory of Glen Smith, please visit our Heartfelt Sympathies Store.

Receive notifications about information and event scheduling for Glen

We encourage you to share your most beloved memories of Glen here, so that the family and other loved ones can always see it. You can upload cherished photographs, or share your favorite stories, and can even comment on those shared by others.

Posted Feb 19, 2021 at 06:49pm
Barbara and Kim , We are so sorry for this. Glen has been really special. The Friday cookies and coffee while we solved the worlds problems ,

Posted Feb 19, 2021 at 05:03pm
Glen and I were classmates for many years and he was one of the smartest people I knew. He had a vast array of knowledge about a wide variety of topics. Mostly he was a good friend and a great person to know. RIP dear friend.
Comment Share
Share via: 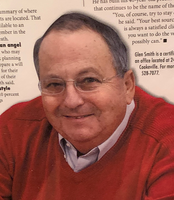