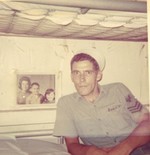 Charles "Homer" Baker, 84, was born on July 9, 1937 in Pineville, KY to the late Ethel Partin Baker and Charles Lee Baker. Mr. Baker served over 24 years in the United States Navy. He served from 1955 until 1978. He was a Vietnam War Veteran and retired from service on December 13, 1978 as a Chief Petty Officer. He was a devoted husband, father, grandpa, great-grandpa, and a friend to all that knew him.

He is survived by his
sister,
Mary Joyce Gambrel of Danville, KY

He is also survived by his puppy D.O.G., his crocodile Gatorade, and his long time grandpuppy Riley Goodin.

In addition to his parents, he is preceded in death by two brothers, his wife, Sharon Elliott Baker, son, Bobby Lee Baker, daughters, Rose Baker Haney and Joyce Baker LaFever.

A funeral service will be held at 12:00pm on Tuesday, March 22, 2022 at Presley Funeral Home located at 695 Buffalo Valley Rd Cookeville, TN 38501. Interment will follow at Salem Church Cemetery.
The family will receive friends from 10:00 am until time of service at 12:00 pm.