To share your memory on the wall of Carroll Adams, sign in using one of the following options:

Print
TOMMY ADAMS, A MAN WHO FELT WITH HIS FINGERS.

Born Tue... Read More
TOMMY ADAMS, A MAN WHO FELT WITH HIS FINGERS.

Born Tuesday, October 4, 1938 in Science Hill, Kentucky, he was the son of the late Fred Adams and the late Dorothy Roberts Adams . He was the loving husband of Mary Loggins Adams for 63 looooong, glorious years.

Tommy told his wife he loved her 4 times in his life...once when they married, second and third resulted in their loving children, and the fourth time was once when she made him biscuits and gravy. He was a loving father to his second child...although his first child and he made up in the end. He enjoyed playing cards (although he cheated a lot), winning too many times. He adored his daughter Lisa and enjoyed watching and video taping every game she played (including everything she did). EVERY. THING. SHE. DID! Dad taught his least favorite child (Nick), the love and appreciation for fine weaponry and wood working. (He still feels cheated).

But seriously, he was deeply loved and was a great husband and father. He will be greatly missed.

In addition to his wife Mary, he is survived by:

1 daughter: (that we know of):
Lisa (Mike) McConaha of Sparta, TN

In addition to his parents, he was preceded in death by his 2 brothers, Mike and Don Adams.

A Funeral service will be at 4:00 PM on Wednesday at Crest Lawn Funeral Home located at 800 West Jackson Street Cookeville, Tennessee 38501.

Online condolences may be made to the family at crestlawnmemorial.com
Read Less

To send flowers to the family or plant a tree in memory of Carroll Thomas Adams, please visit our Heartfelt Sympathies Store.

Receive notifications about information and event scheduling for Carroll

We encourage you to share your most beloved memories of Carroll here, so that the family and other loved ones can always see it. You can upload cherished photographs, or share your favorite stories, and can even comment on those shared by others.

Kyle, Julie and the Capps kids, Dan & Judy Moschel, and other have sent flowers to the family of Carroll Thomas Adams.
Show you care by sending flowers

Kyle, Julie and the Capps kids

Kyle, Julie and the Capps kids purchased flowers for the family of Carroll Adams. Send Flowers

Posted Jan 26, 2021 at 09:52am
Our dearest condolences from your Plains family. May you all draw close together in this time of need.

Plains All American purchased flowers for the family of Carroll Adams. Send Flowers 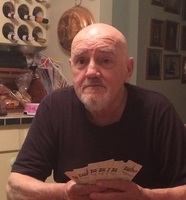