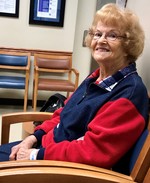 Agnes was born Wednesday, April 20, 1927, in Monroe, Tennessee, and she was the daughter of the late Billie Morgan Garrett and the late Rosa Alta (Flowers) Garrett.

Agnes was a loving daughter, sister, mother, grandmother, aunt, and friend. She was an avid gardener that loved all flowers. Agnes was loved by all that knew her and she will be greatly missed.

Agnes chose cremation, the family followed her wishes, and no memorial service is planned.